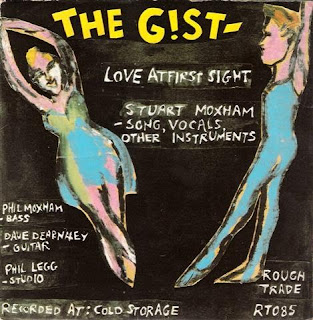 The Gist’s Love At First Sight captures perfectly a certain aesthetic that was of particular importance to me at the time of its release. That is, the subversion of the middle-of-the road pop format. This single, I would argue, has that same certain something that makes, say, Gallagher & Lyle’s Heart On My Sleeve or I Wanna Stay With You so special. I wasn’t alone in this way of thinking. For some time Vic Godard had been talking about wanting to record inventive M.O.R. songs to be played on Radio 2. Alan Horne was urging his protégés The Jazzateers to be more like Andrew Gold of Never Let Her Slip Away fame. The Pale Fountains and Weekend were heralding a new age of Bacharach, bossa and jazz-influenced pop. And many of the UK lovers rock successes of the day were wonderful adaptations of M.O.R. pop hits. The ultimate outcome would have been for a lovers rock reinterpretation of Love At First Sight to be played to death on Radio 2, but it didn’t happen.
The odd thing is that although I worshipped the 7” of Love At First Sight I have no real recollection of The Gist’s Embrace The Herd LP coming out on Rough Trade around the same time. It wasn’t, I suppose, the album I was waiting for, and I had to wait until the Rykodisc CD reissue around 1999 to start to play catch up. Rykodisc was particularly active around that time, and deserves credit for an impressive programme that featured reissues from Robert Wyatt, Mission of Burma, Galaxie 500, etc. I believe the Rykodisc reissue of The Gist’s LP was prompted by an excellent April 1997 Johnny Black piece in MOJO, where the former Smash Hits writer painted a wonderfully bleak picture of the difficult personal circumstances in which Stuart Moxham conceived the LP following the disintegration of the Young Marble Giants.
Stuart I guess sometime in 1981 went into Cold Storage studios and, with Phil Legg as producer, put together an LP which at the time I would have desperately wanted to be a dozen variants on the theme of Love At First Sight. Instead they came up with a strange, fragmented collection which 30 years on still seems to reveal new delights. The Gist left us with so little which hinted at so much, and now I want the LP somehow to develop further its various themes. It would, for example, be lovely to hear more of how Stuart would work with the TV theme ideas that started with the YMGs’ Testcard experiments. For the non-waged and those outside of the weekday working pattern daytime TV has been a constant distraction, and so often the addictive music from kids TV programmes (Rainbow, Play School, etc.) has inveigled its way into our subconscious. Stuart Moxham in an alternate world would surely have found steady employment putting together such themes. And, let’s not forget, for many of us the first exposure to Italian soundtracks would have come via The Muppets reinterpreting Piero Umiliani. I also find myself thinking of the library music and themes used for Grange Hill, George & Mildred, and Robin’s Nest, and a certain proximity to The Gist.
The wholesale immersion of recent years in aspects of Krautrock, the BBC Radiophonic Workshop, European library recordings and film themes seems to connect in a strange way to Embrace The Herd. Its sketches, however, hint at a future that is imperilled, in danger of being stolen away from Moxham, whereas the music of Ghost Box/Broadcast suggests nostalgia for the future that never happened. Ironically early Young Marble Giants recordings in Cardiff were put together with the help of what Stuart described as “moonlighting old boys” at local BBC studios. It’s tempting to think of tweed jackets, pipes and lab coats.
It would also have been great to hear more of the suggested skeletal disco from The Gist that could have put them up there with Arthur Russell in the current canon, though perhaps Chas Jankel would have been a contemporaneous comparison closer to home. Certainly listening to the Chazablanca and Chasanova LPs there are some wonderful moments where he blends disco and occasional reggae elements in a way that’s still not really celebrated. A big factor on Embrace The Herd, too, is the spectre of contemporary Jamaican dub that haunts The Gist’s work and approach. Perhaps this is not surprising, as time and time again you read how a soundtrack of dub permeated early ‘80s London life in derelict squats. The underpinning reggae influence that resonates through The Gist’s recordings oddly found a very explicit outlet on a curious 45 by Jah Scouse who toasts over the lovely reggae minimalism of Stuart and Philip Moxham, with Phil Legg at the Cold Storage controls. I have a weakness for reggae recordings which feature variations on the “every mickle mek a muckle” theme, from Bunny Wailer’s Fig Tree to Pato Banton’s Gwan. Despite the adopted name, and the picture of Bill Shankley adorning the 7”, Jah Scouse (or Ian Kay) seems to be a toaster and occasional actor who is something of a Cardiffian legend. The credits on Embrace The Herd interestingly show a strong representation of Moxham’s Cardiff contacts among the newer Rough Trade associates, like Phil Legg, Viv Goldman and Epic Soundtracks.
I have to confess that I wasn’t aware until recently that Etienne Daho had a hit in France with Paris Le Flore, a reworking of Love At First Sight, which helped Stuart out no end financially at a vital time. I didn’t know either that Lush had covered the song, in a rather lovely if stripped of the reggae way. I do know, however, that every time I hear a song on an oldies station, one of the strangely irresistible soft rock ballads like Foreigner ‘s Waiting For A Girl Like You or Africa by Toto, I involuntarily think of The Gist’s Love At First Sight and my parallel universe where the song became a perennial daytime radio favourite.