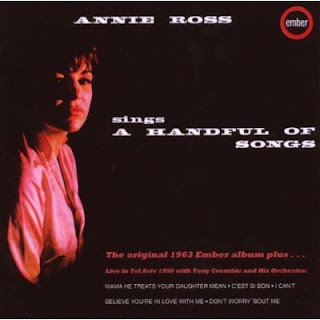 Jeff Kruger's Ember is another record label that pops up several times in Enlightenment!- the current edition of YHO which can be downloaded here. Ember was started it seems almost accidentally at the end of the ‘50s by Jeff Kruger, a London legend who with his father started the original Flamingo Club in Soho, home for the modernists. Jeff indulged himself and got some of his favourite British jazz players to record for him, like Tony Crombie and Ronnie Ross. He also liked the idea that an independent label could thrive by exploiting niche markets, and he went for pretty much all of them. Along the way he leased a fantastic amount of great music from the US, but his big coup was getting John Barry on board as musical director etc. just as his career was gathering momentum, with the Bond stuff, Zulu, and so on. So, among the Barry-related Ember releases was the great Zulu Stamp.
Jeff Kruger also had some of his favourite ladies record for the label. He put Lita Roza together with Tony Crombie for the astonishing single of Mama He Treats Your Daughter Mean. And Annie Ross got to make an LP with a real torch song feel – the title song of which was Lionel Bart and Mike Pratt’s A Handful of Songs. Annie herself, the great internationalist, was back ‘home’ in London at this time after her great success with Lambert and Hendricks, and the fantastic series of solo LPs with American jazz greats, like Art Pepper, Chet Baker, Gerry Mulligan and Jim Hall. She even opened her own nightclub, Annie’s Room, as mentioned in this great clip.
There are plenty of connections between John Barry and Lionel Bart, which are covered in Enlightenment! There’s the title song of You Only Live Twice, of course. And Adam Faith. Bart and Barry collaborated on the theme song for Never Let Go, in which a young Adam appeared with Peter Sellers, and in a seemingly uncoordinated way this was an update of When Johnny Comes Marching Home. Barry of course was responsible for the adventurous sound on Adam’s early hits, and Lionel knew Faith from skiffle days in old Soho.
Adam interestingly recorded a couple of songs from the Frank Norman/Lionel Bart musical Fings Ain’t Wot They Used T’Be. That show really wasn’t the quaint Cockney charmer history seems to paint it as. On the contrary, it’s theme and setting among Soho’s crooks, prostitutes, corrupt policemen and assorted lowlife would surprise anyone who has tapped a toe to the Max Bygraves bowdlerised title song. Adam’s similarly smartened up recording of Carve Up will I’m sure shock anyone who hasn’t heard it before. And the guitar solo is fantastic. Then there is Adam’s rendition of Big Time, the James Booth performed showstopper in the successful stage version, which sensibly leaves out lines about raids down Walworth way and fracas in Notting Hill, but retains ones about using his wits instead of just his mitts. This is a wonderful performance, with John Barry’s group, and it’s a great testament to the songwriting skills of Lionel Bart. Isn’t that where we came in?