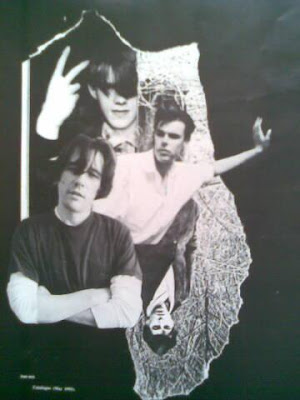 Into double figures already (you mean readers? Oh behave ...). The tenth issue of Your Heart Out is now available to download for free. Affectionately known by the codename: Folklore. That's folklore as in the study of traditional beliefs or at least beliefs popularly held. That's folklore as in new perspectives, invectives and necessary mischief. Or to put it in more conventional terms, the new issue features Postcard's last stand, UK hip hop's winning hand, folk, blues, bossa and beyond ...
The front cover is a still of rapper Wildflower from the video for Domestic Science by Skitz. The back cover is a shot of Vic Godard from his performance at London's Town & Country Club, September 1992.
And between the covers? Well, in a climate where culturally the shutters have come down, and accepted truths remain accepted truths, hopefully YHO has a role to play in shaking things up a little. So please spread the word, before they run us in.