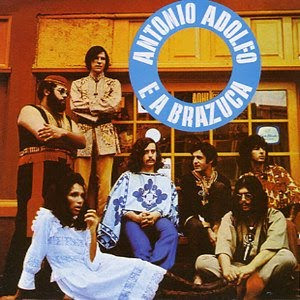 One of the main themes of the ninth issue of Your Heart Out (downloadable for free in the library on the left ...) would be independent labels. There was an attempt to glimpse past the curtain of punk and the myths that are propagated to different times and different places. There was quite a bit related to Bob Thiele, and I suppose it was painfully obvious that I’d been reading Bob Thiele’s autobiography and the Impulse Records story. Fair enough. Thiele was quite a character, and has some great tales to tell.
Issue 9 also touched upon The Numero Group and the important salvage work it’s been doing with its Eccentric Soul series, highlighting the role of small and local labels in the development of soul and funk. Then looking toward the present day there would be a tip of the hat to the labels that fight their corner in a changing consumer climate.
Far Out was a label highlighted, and readers were pointed in the direction of its recent release of Joyce’s Visions of Dawn, a beautiful set salvaged from 1975. Other Far Out releases by Arthur Verocai and Antonio Adolfo are also heartily recommended. I have to say that when I bought Antonio Adolfo’s Destiny I didn’t know much about his music or his story. But that’s the beauty of labels like Far Out, the role of signpost, directing people to sounds not generally known.
In the same way that a Far Out Milton Nascimento salvage operation sent me scurrying in search of more of Milton’s angelic output, so similarly I went in search of the Antonio Adolfo e Brazuca recordings referenced on Destiny. Some will know these beautiful recordings better than me. For others, there is a real treat in store. If you have any interest in Brazilian music of the late ‘60s into the early ‘70s, post-bossa, post-tropicalia, then this will be for you. Choral vocal arrangements, funky Fender Rhodes, and all that. So here’s a selection of tracks from Antonio Adolfo e Brazuca. With love.
Posted by Yr Heartout at 12:44