A Shade of Difference 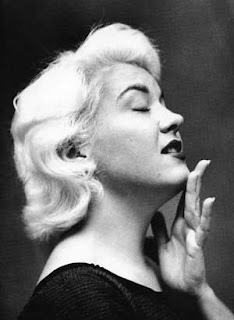 Aha. Postcard Records related cuttings. That'll grab their attention won't it? They'll all be downloading that folder. And there'll be some new visitors. Kindred spirits new to the fold. They'll know what was meant about Postcard and its world view being the catalyst that sparked a unrelenting passion for seeking out less familiar corners of the musical universe. And thus that particular post being in the proximity of ones relating to Antonio Adolfo and Arthur Verocai, Brazilian musical magicians, then they'll soon be downloading the lovingly put together mixes relating to those two maestros. I mean that's much more in keeping with the spirit of Postcard than ... well, don't start me on that one.

Anyway, Folklore, the tenth issue of Your Heart Out, which our corporate sponsors say can be downloaded free for all in the legendary library on the left, starts out with a couple of pages relating to Helen Merrill, who has been dominating the archaic music players chez nous. If as is suggested Postcard, or more precisely its patron saint Vic Godard, did stimulate an interest in vocal jazz, then I am eternally grateful that this road led me to Helen. She has made numerous exceptionally beautiful records. Sets in the mid-'50s with Clifford Brown, Quincy Jones, Gil Evans, and Bill Evans. Wonderful sets in the '60s with Dick Katz. And the brilliant turn of the millennium Jelena Ana Milcetic as she entered her 70s. And my particular favourite which is The Artistry Of ... where ballads are delivered in a strikingly stark folk-like setting.

There is a small selection of some of Helen Merrill's most wonderful recordings here, which I have no doubt will prove as popular as the Postcard cuttings. Missing from the mix are tracks from Helen's early '60s Italian recordings with Piero Umiliani, but then I refuse to believe that people haven't read Your Heart Out and rushed out to buy a copy of Parole e Musica. But just in case you need a prompt ...