The Point of Perfection 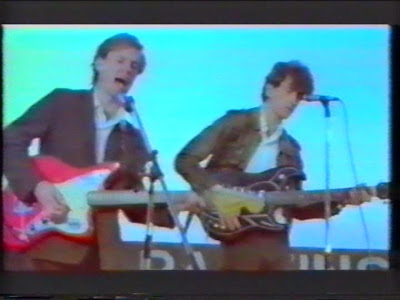 A commercial break. Our comrade in arms over at the Fruitier Than Thou blog has posted a recording of Hurrah! live at Keele University, in November 1983, when their shows were often akin to religious revival meetings, and it wasn't unusual for audiences to be so fired up after their performances that they would take to the streets and march under a red banner to the local citadel of civic corruption or perhaps the local radio station and overthrow the fakers or words to that effect. Of course the authorities soon clamped down on such proceedings and Hurrah! and their followers had to disappear underground and regroup on the quiet, live surreptitiously as sleepers, waiting for the day when the revolution would arrive, and the insurgents would be awakened with the code word: Keele ... Well, that's what it sounded like.
Posted by Yr Heartout at 14:09