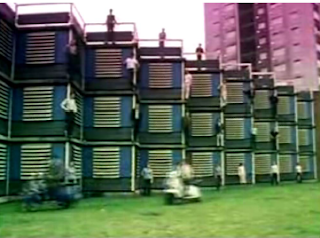 The cover of the very first YHO from November 2008 was a still from Steve Barton’s excellent promo video for Secret Affair’s Time For Action.  It sets the scene nicely for an essay on the 1979 mod revival.  This includes a couple of important passages:
“The last thing the mod revival could be called was an attempt at authentic recreation. That’s a given. Yet what is rarely understood is how it was not about channelling memory. Think of people like Jerry Dammers, Ian Curtis, Green Gartside, Julian Cope. They were using memory as a shaping force. Ska, Iggy, Robert Wyatt, the Seeds. They were also that bit older than most of the people who got into the mod thing.”
“There was something about the mod groups which was very oh I don’t know. It’s like when you were at school and you knew all the answers but couldn’t be bothered to keep putting your hand up and getting it right. Sometimes it was nice to just know. And not let on.”
The contents of this edition also include:
Ø  The future of pop – the sounds of Janelle Monáe, Georgia Anne Muldrow, etc.
Ø  Female jazz singers – the bleak, desolate, cerebral ...
Ø  Discovering bossa nova – from The Face to él and Loronix
Ø  Laurindo Almeida – with the MJQ/Joanie Sommers/Sammy Davis Jr.
Ø  The Fallen Leaves
Ø  Raw Records – the UK’s greatest punk label
Ø  Peter Coyle’s solo LPs, Marina Van Rooy and Liverpool’s Eight Productions
Ø  Charles Stepney, The Dells, Bacharach & David, Love ...
Ø  Alfie and Robert Wyatt, Bertrand Burgalat and Philippe Katerine.

This issue can be found here ...