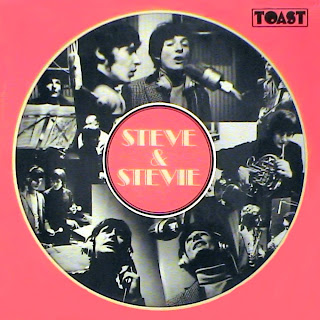 It Will Never Be Over ... is the latest edition of YHO which can be downloaded free for all here. It is a riotous romp through the UK's soul undergrowth and pop flowerbeds of the late '60s and early '70s.
Right at the heart of this issue is Vicki Wickham's fascinating label Toast, which was active for a short while in the late '60s. There were some heavy hitters involved with the recordings, including the arrangers Ian Green and Derek Wadsworth. Gerry Shury, one of the early YHO heroes, was also involved, doing the arrangements for the Steve & Stevie LP Toast put out. This was a slightly atypical Toast release which generally concentrated on the soul side. The Steve & Stevie sound was rather more baroque, much closer to the Beatles and Bee Gees than Cadet or Calla.
Steve and Stevie were the Australian duo Steve Kipner and Steve Groves who moved to London to seek success. The closeness to the Bee Gees sound, I guess, is understandable as Steve Kipner's dad Nat was very important in the story of the Brothers Gibb. Nat also relocated to London and worked for Major Minor, Toast's parent company, and it's pure speculation but that could have a lot to do with the Steve and Stevie coming out on Vicki Wickham's label.
The Steve and Stevie LP is gorgeous, and Gerry Shury's arrangements on tracks like Sunshine On Snow are totally wonderful. The duo were whisked away by the Robert Stigwood Organisation at the behest of the Bee Gees, and evolved into Tin Tin who occasionally had a bit more of an edge to their sound and it's easy to see their two LPs appealing to fans of Badfinger, Left Banke, Raspberries. Gerry Shury was involved again with orchestral arrangements on the two Tin Tin LPs and this had a lot to do with him being invited to work on the Bee Gees' 2 Years On LP.
Steve Kipner, incidentally, went on to do many more things in music, including the group Friend, and as songwriter he's had a hand in such delights as Olivia Newton John's Physical and Robert Wyatt's favourite Fight For This Love by you know who ...
Posted by Yr Heartout at 03:51