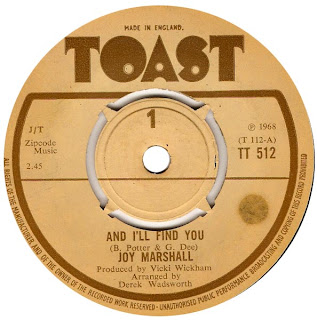 It Will Never Be Over ... is the latest edition of YHO which can be downloaded free for all here. It is a riotous romp through the UK's soul undergrowth and pop flowerbeds of the late '60s and early '70s.
Right at the heart of this issue is the fascinating label Fresh Air which seems to have been active in 1974 and 1975, and put out around 30 singles and at least four LPs. The man behind the label was legendary industry insider Tony Hall, one of the most significant figures in British popular music. Tony's background was in jazz, and in the late '50s he ran the Tempo label for Decca and was responsible for recording the best of the modernists active on the British jazz scene, such as Dizzy Reece, Victor Feldman, Tubby Hayes and Tony Crombie.
While Dizzy and Victor went to the States to chase their dreams, Tubby stayed in London as hero to some and an unknown to many more. His reputation has grown thanks to a series of reissues and so on. YouTube has helped too, revealing some great footage of Tubby's bands over the years. The general consensus now is that Tubby's 1967 set Mexican Green is his best work. It features a lovely song, A Dedication to Joy, for his girlfriend at the time Joy Marshall.
Joy was an American singer, who moved to England in the early '60s, worked with Johnny Dankworth's orchestra, appeared in Lionel Bart's Maggie May, recorded some sides for Ember and Decca, and had a minor hit with The More I See You. Her Decca releases include the majestic and very dramatic beat ballad Heartaches (Hurry On By) which just oozes class like a Nancy Wilson soul side.
Joy also had a single out on Vicki Wickham's Toast label in 1968 which featured the gorgeous And I'll Find You on the a-side. Sadly Joy died that autumn from an accidental overdose of sleeping tablets. In her book Mama Said There'd Be Days Like This Val Wilmer writes about Joy, her struggles, and the funeral itself. Tubby would be prompted to write another song for Joy, his sad lady ...
Posted by Yr Heartout at 02:53