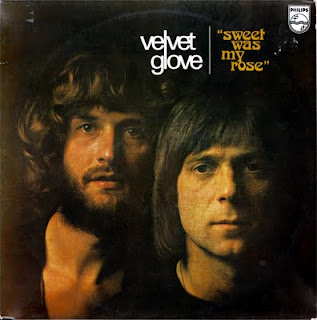 It Will Never Be Over ... is the latest edition of YHO which can be downloaded free for all here. It is a riotous romp through the UK's soul undergrowth and pop flowerbeds of the late '60s and early '70s.
Right at the heart of this issue is the fascinating label Fresh Air which seems to have been active in 1974 and 1975, and put out around 30 singles and at least four LPs. The man behind the label was legendary industry insider Tony Hall, one of the most significant figures in British popular music. Fresh Air didn't have any hits in the UK, but had considerable success abroad, particularly with Velvet Glove's Sweet Was My Rose which was a massive success on the Continent. It is one of those songs that will seem curiously familiar to many people. It blends, say, The Band's country rock with Cook and Greenaway earworm qualities. It's also a great example of the '70s passion for 'story' songs, particularly those with a touch of tragedy about them, like Hot Chocolate's Emma.
Velvet Glove were the songwriting duo of Ken Leray and Roger Spooner. As Velvet Glove they put out a great Shel Talmy-produced LP on Fresh Air, but this has pretty much vanished. I can't add much about the duo. Ken Leray I know a little about. He wrote Rose-Coloured Windows which Mandy More recorded as a single for Fresh Air. It was Tony Hall who had been behind Mandy's rediscovered LP But That Is Me which Sunbeam salvaged for us. Ken wrote songs for the much loved Doctor Snuggles cartoon series, but his real success came when Fern Kinney got to number one in the UK with his song Together We Are Beautiful which he'd recorded (in a way that reminds me of the great Peter Skellern) in 1977. Fern's number one came in early 1980, between Blondie's Atomic and The Jam's Going Underground, and that's one beautiful sequence. I am particularly fond of Fern's hit as it's a perfect example of easy listening disco. It's also got an odd lovers rock feel to it. And, yes, inevitably there is a lovers rock version I am particularly fond of by Samantha Rose. As for Fern, she made some other wonderful light disco recordings around the same time, such as Love Me Tonight, but didn't match the success of this again ...
Posted by Yr Heartout at 00:22