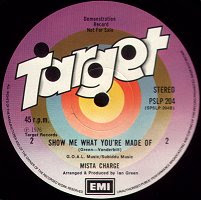 It Will Never Be Over ... is the latest edition of YHO which can be downloaded free for all here. It is a riotous romp through the UK's soul undergrowth and pop flowerbeds of the late '60s and early '70s.
This issue starts with stumbling across a YouTube posting of the British soul treasure Joe E. Young & the Toniks' Flower In My Hand on the Toast label and setting off on an expedition to find out more about Vicki Wickham's boutique label. The song itself was written by Ebony Keyes and Pete Gage. Pete Gage is well known for his Geno Washington & the Ram Jam Band connections. Ebony is one Kenrick Des Etages from Trinidad, who moved to London in the '60s, did a bit of singing, and ended up reinvented as Ebony Keyes. Along the way he made some great 45s with the legendary John Shroeder, such as the Northern Soul favourite If You Knew (written by Pete Gage). He also wrote some very smart soul songs of his own, such as What Love Brings for Kenny Bernard.
Into the '70s Ebony Keyes became Lee Vanderbilt, and along the way he became an essential part of Biddu's backroom staff. But there's a lot more to his story than that. Ian Levine rates his 1974 track Pick Up Your Troubles as one of his all-time favourites. And Lee's involvement with the Black Joy soundtrack produced an all-time classic in Lonely I.
Lee was also involved with Ian Green and Rosetta Hightower in Charge who made an LP for Tony Hall's Fresh Air label in 1975. A few more singles followed on Roger Greenaway's Target label, including the funk classic Show Me What You're Made Of.
Posted by Yr Heartout at 00:30