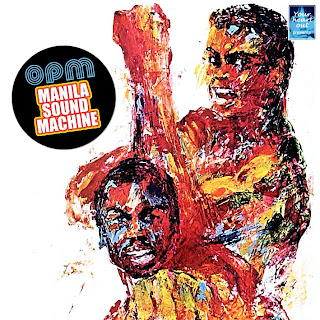 OPM - Manila Sound Machine is the latest in the special YHO series of mixtapes, and it’s available to download for free here. This collection of thrillers from Manila captures the sound of the Philippines in the 1970s. Drawing on the archives of the Manila Sound and O.P.M. (Original Pilipino Music) it will appeal particularly to those with a fondness for, say, the Starland Vocal Band’s Afternoon Delight, the Four Seasons’ Silver Star, and so on.

The Manila Sound was a phenomenon that took off when the music industry in the Philippines developed its own thriving scene with homegrown recordings, drawing very heavily on American pop trends but with songs delivered using lyrics in the Tagalog language with English phrases often wonderfully interjected at odd moments. Prior to this a lot of Pilipino pop was straight copies of the American sounds which flooded the airwaves. There’s nothing inherently wrong in that, and the teen outfit the Rocky Fellers were particularly successful with the classic Killer Joe, for example, in the early ‘60s.

I have to admit I was completely unaware of the Manila Sound and its successor O.P.M. until I chanced upon a video of VST & Co. performing Step No, Step Yes, and had to rub my eyes in disbelief at such exquisite execution of the late ‘70s disco/soft pop sound, complete with synchronised poolside dance sequence, and a melody as ridiculously addictive as Todd Rundgren’s I Saw The Light. There were a couple of other clips of VST & Co. in action to prove this was not a one-off, and from there I confess I was hooked on the Manila Sound.

The 1970s in the Philippines was a time of martial law under the Marcos regime and a time when the islands’ tourist industry was thriving. That sort of contradiction captures the Manila Sound quite nicely. VST & Co. were massive stars with their re-imaginings of US stylings. The irony is they were actually better at the whole thing than some of the people who inspired them (and rather brilliantly I saw an interview where Roger Rigor from the group mentions Dan Fogelberg and England Dan & John Ford Coley as influences). There are mentions too of Diana Ross being a fan of the VST & Co. track Awitin Mo At Isasayaw Ko which got played quite a lot at Studio 54 apparently.

The mix starts with a track from the group Cinderella, who have become particular favourites of mine. The influence of the Carpenters is inescapable, and singer Yolly Samson has one of those voices that just makes you melt in the same way Karen’s can or Françoise Hardy’s singing can. But vocal duties were swapped around, and when the guys took to the mic it entered David Cassidy sinisterly sweet territory. The sound of Cinderella is almost overly saccharine at times, but for that very reason it is fatally fascinating. Yolly, I’m afraid, died rather too young, and there seems frustratingly little about her instantly accessible, though perhaps that adds to the mystery.

Despite the appeal of soft pop and disco there was much more to the Manila Sound or OPM. Asin, in particular, mixed pop with Pinoy folk roots in a pretty radical way. The name Asin itself apparently derives from the Joan Baez cover of the Stones’ Salt of the Earth, which gives a pretty good clue to the group’s sound and the singing of the gloriously named Lolita Carbon. The Stones’ lyrics (“Raise your glass to the hard working people. Let's drink to the uncounted heads. Let's think of the wavering millions who need leading but get gamblers instead”) taken at face value summed up the Asin stance, identifying with the mass of people in the Philippines who didn’t have a voice under the Marcos regime. From what I can gather their songs were not explicitly political but their late ‘70s recordings struck a chord with people and their particularly Pilipino identity was something people could claim as their own. The track featured here, Himig Ng Pag-Ibig, is from Asin’s second LP and I’ve seen it described as “the favourite Pinoy love song of all time.” Freddie Aguilar was another successful singer who mixed folk forms and pop, and his version of the patriotic song Bayan Ko was an important part of the 1986 People Power Revolution leading to Cory Aquino’s election after the downfall of the Marcos regime. The song itself dates back to a 1929 poem by Jose Corazon de Jesus, protesting at the American occupation of the Philippines.

Elsewhere there are strong suggestions of a Brazilian influence. Bong Penera, for instance, was responsible for popularising bossa nova/samba jazz sounds in the Philippines, and you will usually see him mentioned as the Pilipino Sergio Mendes or Deodato. Again, nothing should be taken away from the excellence of his own recordings which could easily nestle along more celebrated sets on CTI. Interestingly both Cinderella and VST & Co. would later controversially redo their hits in a bossa nova style which would not be to everyone’s liking.

This mixtape comes with a huge health warning: there are many people who will know much more than me about Manila Sound and OPM. But these are songs that have thrilled and filled me with genuine joy and I desperately wanted to share a sense of some of the things I’d discovered. They are as you can imagine from ‘a variety of sources’ and you can hear a reference at one stage to Wilbert’s Music Library, which is deliberately left in as a tribute to the people who share their valuable resources with the world. Let's go Pinoy Disco ...

With thanks to Per-Christian Hille for another great cover design.
Posted by Yr Heartout at 01:27