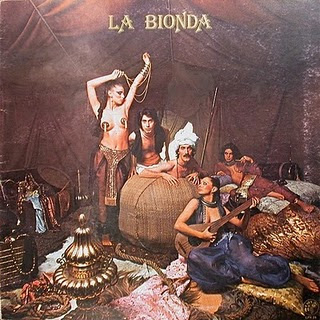 Nothing is ever straight forward is it? I sometimes wish it was. Life would be simpler ... but a lot less fun. Let me give you an example of how nothing is ever straight forward. Recently I was engrossed in compiling a sequence of vintage Afghan pop for the Anywhere Else But Here Today project when I was distracted by one clip that featured a troupe of young girls performing a pop/traditional dance to an astonishing number that almost defied description. It was quite simply the best thing I’d found since stumbling on the video of girls from an Algerian high school dancing to the pioneering rai pop track Ya Salah by Noureddine Staifi. And there were very definite similarities, in terms of time, the mutant disco sound, clash between ancient and modern, the mixture of innocence and knowingness, the pure intoxicating glory of being alive.

The video itself had very little information, except being titled Gulshan Ey Sanam and being labelled simply “Tajik ‘80s video”. Putting together what information I could I began to understand that this was a performance in Kabul by musicians and dancers from Tajikistan, presumably in the early ‘80s. What amazed me though was learning the song itself was a cover or reinterpretation of a 1978 disco classic, Sandstorm by La Bionda. I wish I was clever enough to have spotted that straight off. That wonderful piece of information in itself raises more questions. After all, as far as I know, La Bionda didn’t have any hits in the UK. So somehow a mock-middle eastern flavoured track recorded at the height of the Munich disco explosion, produced by two Italian bothers (who also worked as D.D. Sound), written by Charly Ricanek from Czechoslovakia (who also worked with the great Amanda Lear), engineered by Harry Thumann of Underwater fame (who later returned to the middle east theme on Sphinx), made it to Tajikistan in the Soviet era and was seized upon and reinvented as something to share culturally.

But who had made the astonishing music featured on the video? Were the girls dancing to a recording? Were the musicians shown the ones that played on this? And who were Gulshan? You see! These things can keep you awake at night. Ah the thrill of the chase. Well, from what I can gather Gulshan was an ensemble put together by Karomatullo Qurbonov, a legendary figure in Tajik pop history who, with members of his group, was murdered in 1992 by militia during the civil war that followed the break-up of the old Soviet Union. There is footage on YouTube of Karomatullo talking about Gulshan, but my linguisitic skills fail me dismally so I can’t really add any more. There, however, are some great clips of Karomatullo performing, and the dancers from the Ey Sanam clip seem to feature. There are also a number of other clips of Gulshan (or Golssan as it seems to be translated on occasions) performing at various events with a variety of singers.

Hearing Ey Sanam I thought immediately of PiL’s Flowers of Romance. I almost feel ashamed saying that, clutching at convenient references, but there was something about the hypnotic swirl of sound, the thud of the drums, the mystery, the menace. Then I thought perhaps Death Disco with that guitar sound. And curiously when I sent the Gulshan link to the YHO artistic guru PC (of Music From The Third Floor) fame it was the shuddering bass he picked up on, suggesting it was as if Jah Wobble had spent the ‘80s in Eastern Europe. And there’s something in that. Eastern and disco influences certainly permeated Wobble’s works during that time: if you think of, say, the decadent disco mix of Invaders of the Heart and so on. The great man has also referred to getting inspiration from the mix of sounds from around the world he’d hear on his shortwave radio, like Egyptian singer Om Kalsoum. It’s tempting to play with the idea of Wobble hearing Ey Sanam through the crackle back home in his East London flat.

The sound on Ey Sanam is so fantastic that it makes you wonder what else Gulshan came up with? I have heard one other song on a Soviet disco mix. But were there records? Are they available anywhere? And was the Gulshan version the only reworking of Sandstorm around at that time in Tajikistan? I’ve heard an instrumental uptempo disco version which I think is by Na-Na, but I’m unsure of the vintage of that one. The song itself, Ey Sanam, seems to have a life of its own. Search around and you’ll find contemporary 'house' remixes and cover versions from around the world. But there is something enchanting about the grainy salvaged from VHS quality of the Kabul clip that captures perfectly a pop moment.