Which side are you gonna be on? 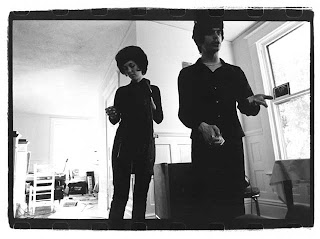 There was metaphorically speaking a bit of waving of ye olde stars 'n' stripes going on in the tantalising tenth issue of Your Heart Out, which has become known as Folklore (and can be downloaded for free in the library on the left). So, yeah, we were celebrating some great Americans. Pete Seeger, Helen Merrill, Leadbelly, Jo Stafford, and so on. And Tav Falco. Tav got full honours for introducing us to the Bourgeois Blues, which he mixed in with a bit of Ginsberg's Howl! One thing I like about Tav is that he's not afraid to wear his passions on his sleeve. And it's not all Memphis either. He's a big tango fan. Now I have to confess I'm not that familiar with the world of tango (yet) but one book I do recommend is The Tango Singer by Tomas Eloy Martinez, which is a fantastic story about searching for this elusive singer that sings these lost tango numbers in spectacularly secret locations around Buenos Aires. And talking of Tav and the tango ... fades in slowly as dear John would say so talk among yourselves for the first minute or so.

Another of the great Americans in the tenth issue of YHO was Jonathan Richman, and the case was made for Rock 'n' Roll With The Modern Lovers being the most subversive album ever. Revolutionary in its content. In the context of punk. Kids' songs. Folk and traditional numbers from around the world. Rockin' minimalism. Reggae influences. And a massive instrumental hit. Check that on YouTube and if you're not distracted by egyptian reggaeton (well I was) then you might stumble across the bizarre Top Of The Pops interpretation of the song that is more Carry On Up The Khyber than Wilson, Keppel & Betty's old music hall turn. Spectacularly surreal!

And a third great American mentioned in passing and indeed quoted in the tenth issue was Ian Svenonius. I guess it's de rigeur in these troubled times to carry a copy of Ian's Psychic Soviet in your shirt pocket to whip out and rifle through in search of inspiration. A real all-rounder is Ian. Go on tell me you've seen Ian's interviewing technique and in particular that one where he gabs with Bobby Gillespie. If you've not seen it, go seek! And here's to Bobby by the way. It was he who got me to listen to the Panther Burns. And as for Ian ... well, lest we forget how special the Make-Up was, this is what pop music's all about.