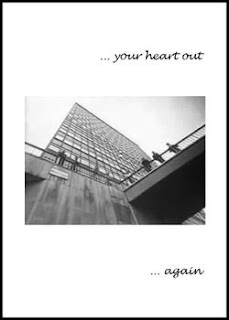 And it’s almost a year since Your Heart Out began to take shape. Just trying to remember the reasons and aims at the time of starting out ....

Well, there was an enforced amount of leisure time, a lack of money, a growing frustration at not finding a music magazine worth reading or if there was one worth reading (Wax Poetics) it would be a little too specialist. I wanted the Mo-Dettes, Marcos Valle and the Soulful Strings together. There was also something about giving something back. Over the preceding months I’d been totally inspired by the time and trouble bloggers were taking to share their passions, to give new life to lost musics. They had opened up so many new vistas, and I owed them.

So it was the old punk impulse of get up and do it for yourself. On a practical note, historically I’d been hopeless at IT, but I’d taken some free courses and acquired the rudimentary skills to enable me to create a magazine of sorts. It had to be a magazine too, as I loved reading in odd places away from computers, and liked the idea of something that had structure as opposed to the randomness of blogs. I liked structure, and the discipline of doing something regularly. I had a bit of a track record with previous projects (as John Carney) kindly published by the Tangents site where I’d been providing weekly instalments as part of a year-long series or three.

So, the aim with Your Heart Out was to produce something monthly. And for ten issues this challenge was met. It even expanded into a blog, with regular posts that gave a little more detail and colour in a lopsided way. The feedback on YHO has been fantastic, which has meant a lot, but overall for something ‘freely’ available the download stats are not encouraging. It was easier to reach people with cumbersome fanzines. Work that one out! Anyway, circulation figures aside, and that doesn’t really matter because if you’ve got something to say you’ll say it anyway, the real point is all this YHO activity became ridiculously time consuming, and took over many aspects of daily life.

I think a point has been made with YHO. It’s been proven that pop writing can be fun, passionate, informative, that you don’t have to write about the usual suspects, and so on. It’s been shown it’s possible to do something a little different. Thus, for now, it’s time to take a breather, park YHO, and get some other things up and running. Perhaps not quite ‘stop the world I want to get back on’ but along those lines. In the meantime, the London songs project will continue relentlessly. So, please support that and spread the word. And participate!
The infamous YHO library on the left will remain open. And that just leaves me to thank all the people, new friends and old comrades, who have stood up and waved a clenched fist in support of YHO. Oh, and in case you wondered, the name came about because I had this song on my brain ...