A South London Story ... part one 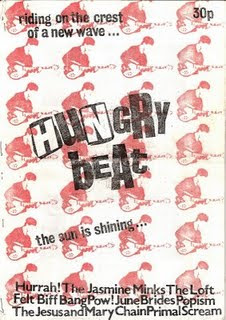 Readers of a certain age will remember comedian/mimic Mike Yarwood would finish his shows with a song which he'd introduce with the line: 'And this is me ...' Well, in a similar vein a flurry of online activity which has focused on ancient fanzines reminded me that it is pretty much 25 years to the day that the first issue of Hungry Beat appeared. I had been involved with fanzines before, but this was the first thing I'd done on my own. Actually that's not strictly true because three of the articles in that first issue were written by one Pete Whiplash, who in some circles is better known as Bobby Gillespie. I'd met Bobby the previous summer, just after he'd left The Wake, and we'd struck up a fevered correspondence, swapping tapes, real you've-gotta-hear-this type stuff, as you did. Actually there's a funny story where someone came up to me at a Bodines/Laugh show and asked if I was Pete Whiplash, and said well no, but he'd dashed off in shame before I could explain. The funny thing is hardly anyone knew Bobby was a contributor, which we thought was quite funny, especially when he wrote about the Mary Chain in the second issue. And why not, he was a fan. But I'm sure I could have sold many more copies if I'd used the 'Bobby' factor. Just didn't seem the thing to do though.

That first issue seems odd now. It reminds me of that old song about Camp Granada. Things did look grim, so we were writing about old music. Lovin' Spoonful, Love, Fire Engines, Vic Godard. I hated pretty much everything else, with the exception of Felt, Go-Betweens and my beloved Hurrah! Then gradually in the summer of 1984 things began to get interesting again, with the Jasmine Minks, June Brides, The Loft, Mary Chain, Primals, Biff Bang Pow! all beginning to come good. That was reflected in the fanzine.

There is a tendency to lump everything together. So naturally there is a view that the fanzine world was one big happy family, that the underground music scene in the mid-'80s was a big happy family, and so on. No chance. There were more schisms and factions than you could shake a stick at. I didn't help. I pretty much hated everyone and everybody. I actually hated the fanzine tradition. There had only ever been a few fanzines I thought worth reading. I hated interviews, local focus, jokes, cartoons, bad spelling, poor punctuation. I hated most of the groups most of the fanzines featured. I had definite ideas that writing about pop music should aspire to be as special as the music being written about. I am sure I didn't succeed. But some people were extraordinarily enthusiastic about Hungry Beat. I particular treasure a comment about it making someone wanting to go out and buy records they already owned. I am very proud the fanzine popped up on the front of the first Biff Bang Pow! LP. I am grateful it brought me into contact with people I love dearly to this day.

There were two further editions of Hungry Beat. I honestly haven't seen them in years. Lawrence (a celebrity fan) suggested severely limiting the numbers of the second issue to make it a cult collectors' item. Inadvertently this turned out to be the case because of a bit of a mess up on the printing front when the coloured backgrounds went horribly wrong, and I couldn't afford to get the thing reprinted. The third edition if I remember rightly focused heavily on Dexys' Don't Stand Me Down and the accompanying live shows which made most underground pop outfits seem pretty daft.

Abandoning the Hungry Beat brand for some reason a fourth fanzine came out under the name The Same Sky. This featured the Happy Mondays around the time Freaky Dancin' came out and a number of very poorly attended live shows in London just blew me away. I hope I mentioned Sweet Tee and Jazzy Joyce's It's My Beat. I certainly mentioned in passing a group called The Claim who I'd seen support the Jasmine Minks at the 100 Club. They played to about six people, but were magnificent, and seemed to have that spark, clout and difference-ness that the underground had been missing. So would begin another chapter. The Same Sky also dealt with disappointment about Hurrah! not turning into the group I selfishly needed them to be. Take a few of those things together, and you'd have the ingredients for the next part of this story. In the meantime, here's a reminder why we used to get so excited about Hurrah! The eagle-eyed among you will recognise stills from single sleeves. "Take it Dee Dee ..."