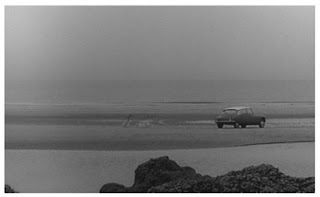 With a still from forgotten French film De L'Amour on the cover, the third issue of Your Heart Out came out in January 2009 with a bit of a theme thing going on. A bit of a concept about concepts, if you like. It started with some thoughts on Janelle Monae and jazz singer Nancy Harrow's series of themed works, moving on to Gary McFarland who was no stranger to such things. Then a question of singing, with Johnny Hartman and Mark Perry, and songwriting with Slumber Party and Phil Ochs. There were overviews of the Tamba Trio and the Cup Of Tea label, and pieces on Brittany Bosco and Muhsinah whose new music was setting our imaginations spinning.
Funnily enough I didn't see this particular performance by Brittany Bosco until after the edition had been saved and posted. But wow! As it was we signed off on the back cover by saying we were dancing in our own way to the Bodysnatchers' cover of Too Experienced, which was on the flip of their second single, Easy Life.
Posted by Yr Heartout at 13:22