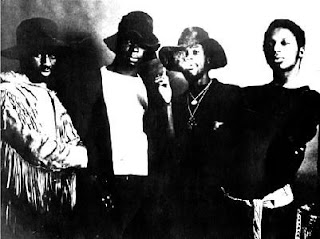 Skimming Stones, the latest issue of Your Heart Out which can be downloaded for free here, mentions how the great Mike Dorane was part of the line-up of UK reggae group Merger which released the fantastic and distinctly odd (in the context of UK reggae in 1977) Exiles In A Babylon LP. But knowing what we know now about the influences and interests Dorane had that's not surprising. Barry Ford, who played in that Merger line-up too, is perhaps best known now for his part in Ladies And Gentlemen, The Fabulous Stains. But he has an intriguing history. He was, for example, part of Noir, an all-black progressive outfit in the early '70s, who released a great lost LP called We Had To Let You Have It. That Noir line-up also featured guitarist Gordon Hunte who would later be part of pioneering UK funk outfit Gonzales, whose first LP featured the amazing (and very topical still) No Way. Merger, perhaps a little surprisingly for a UK reggae group without any big label investment, appeared in 1977 on the Old Grey Whistle Test, with Pam Nestor on backing vocals, which is another story touched upon in the current edition ...