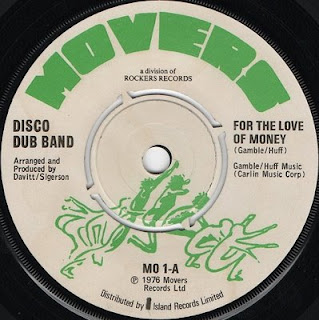 One of the stories at the heart of Skimming Stones, the special issue of Your Heart Out which can be downloaded for free here, is that of Mike Dorane. In 1976 the legendary version of For The Love Of Money by the Disco Dub Band was released. Until recently I assumed it was very much the work of black music writer Davitt Sigerson, which fitted nicely with the later Ze connection. But gradually the role of Mike Dorane emerged as studio wizard and the person behind two labels funded by Island: Rockers and Movers. History hasn't been kind to Dorane's story, and only snippets survive of the labels' output. Among the fragments is the remarkable Can'tTake My Eyes Off You by Fitzroy Henry which has such a sly, slinky dub funk groove it's astonishing. It was at the start of the '70s that Dorane arrived in the UK and became involved with the reggae scene. I guess now his best known recording is Penguin Funk, his collaboration with The Cimarons, from 1972. The Cimarons' own story is such an important one too, spanning the early Pama era through to the punk age when they often played for the Rock Against Racism and even toured with Sham 69 at the peak of their audience's notoriety.