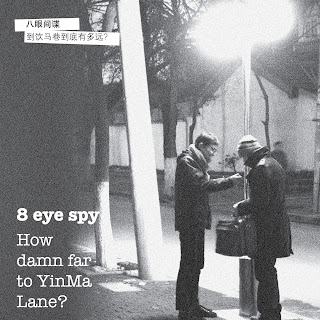 8 EYE SPY is making the most invigorating and exhilarating pop noise around, and I only found that out by chance.
While making one of my occasional searches to see if any new video clips of Lydia Lunch’s early groups had surfaced on YouTube I came across a link that tempted me by saying: “8 Eye Spy: Chinese No Wave”. Well it would have been rude not to click on it. So I did, and I was delighted by what I found. Clearly I wasn’t the only one to give in to temptation, for among the comments was one from Michael Paumgardhen, guitarist in Lydia Lunch’s 8-Eyed Spy, who was similarly enchanted.
The idea of a Chinese Teenage Jesus & The Jerks tribute group might be appealing, but it must be made clear that Nanjing’s 8 Eye Spy is much more than that. While singer Lu Bai may seem to draw on the same powers the young Lydia got inspiration from, and the group as a whole makes a fantastic racket, 8 Eye Spy is very much its own thing. Ironically the late, great George Scott said the name 8-Eyed Spy came from US authorities’ name for a Chinese spy ring. Lu Bai, however, says the name “means we’re hidden in daily life, but are ready to show people who they’re dealing with.”

In general I am not a fan of ‘noise’. I hate heavy rock. I don’t like thrash. I despise great ugly splurges and slabs of sound. I, however, was very much shaped by the New York No Wave, and to this day adore the sound of and stories about DNA, Mars, Contortions, Teenage Jesus. I particularly love some of the groups that came out the No Wave and developed their own sounds in the 1980s like Sonic Youth and Ut. And that’s why I love 8 Eye Spy. They use imagination and defiance in the same way.
There is an 8 Eye Spy album available called How Damn Far To Yingma Lane? It’s one of the most compelling, intense and uplifting new records I’ve heard in a long time. There are blasts of noise, sure, but there is so much else going on which often only emerges on repeated listening. The emphasis is very much on irregular song structures, awkward rhythms, jagged edges, and sharp electric shocks. The ferociousness of free jazz is suggested, though equally there seem to be elements of haunting folk song. It’s a great mixture.
Michael Paumgardhen in his comment suggests something of the early Soft Machine is in the sound, and that makes sense. It makes even more sense when you consider the influence the wider Canterbury Scene had on some of the UK’s post-punk acts like This Heat and the early Scritti Politti. I could add that 8 Eye Spy have traces of the early Pop Group and The Fall, but I’m reluctant to head down that road as it distracts from what is a very ‘now sound’ and a very specific sense of purpose. The LP, for instance, seems carefully thought through, rather than simply a collection of current songs. Lu Bai says it tells the story of someone’s life, but seems deliberately to leave it all open to interpretation. It will be fascinating to see where the group goes next. Fingers crossed it’s to stranger territory!
I confess I know little about how 8 Eyed Spy fits into the wider Chinese underground scene. It does seem to be a thriving network of groups and artists. A little delving around unearths more great groups like 24 Hours and Carsick Cars. They seem infinitely preferable to the combos and chancers clogging up communication channels in the West. Hopefully there are already many music fans who know a lot more about these groups than me.
The 8 Eye Spy LP, which is easily obtainable through Amazon by the way, is released through the Beijing-based label Maybe Mars, which seems to have been busy over the past few years steadily releasing a series of records documenting The Sound Of Young China. 24 Hours and Carsick Cars are actually among the groups on the label, and you can find a fascinating free label sampler here.
Posted by Yr Heartout at 15:41