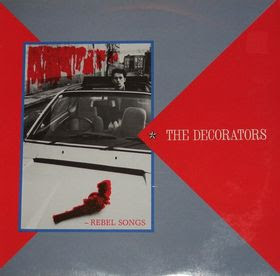 The ninth issue of Your Heart Out is now available to download for free in our library on your left (£12 for a music mag? You'd have to be loopy!). Among the central themes of A Restorative (as it's affectionately known) are the acts of reclaiming and returning from exile. The Concise Oxford Dictionary used to have words for such things.

Now, while some inspirational sounds continue to be reclaimed or welcomed back from the dead (thank god!) others remain forgotten. That's stating the obvious. But it did at least offer an opportunity to focus on The Decorators, a lost group of the early '80s, mainly active in London and never quite fitting in despite being well ahead of the game with their beautiful big guitars, quiffs and shades. Their output was fairly weighty, but they're still waiting for their time to arrive. Singer Mick Bevan had a way with words, and an unusual way of phrasing, and a knack for knocking together haunted, dramatic, twisted torch songs.

If you like the Saints' Prehistoric Sounds and the OJs' third LP then The Decorators will tickle your fancy. While they remain ripe for rediscovery, here is an introduction to their irregular ballads and romantic gestures, including Red Sky Over Wembley, the number that precipitated our London songs project ...
Posted by Yr Heartout at 08:16