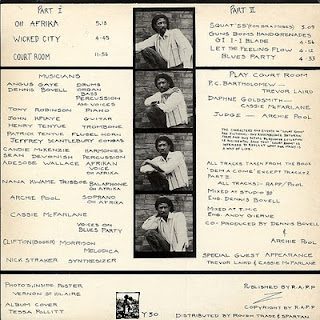 Skimming Stones, the special issue of Your Heart Out which can be downloaded for free here, concludes with a mention of the record Archie Pool's R.A.P.P. Presents Wicked City, which was produced by Dennis Bovell and released on Dick O'Dell's Y label. It's not the first time it's been mentioned wistfully in the back pages of YHO, and who knows with a birthday looming in a few days time perhaps someone will take a hint? Hmmm. I can't add much about the record. R.A.P.P. I believe refers to Radical Alliance of (Black) Poets & Players. Archie himself is an actor. He played Dreadhead in Babylon. And Stephen Bourne's excellent book Black In The British Frame refers to Archie appearing in a couple of Horace Ové films: one being, A Hole In Babylon, for the BBC's Play For Today in 1979 about the 1975 Spaghetti House seige, and the other being the 1987 Channel 4 comedy drama Playing Away, written by Caryl Phillips, about a cricket team from Brixton playing a friendly match in a well-to-do Suffolk village. Another of the featured vocalists on the LP, Cassie McFarlane, is also mentioned in the book for her part in the 1981 film Burning An Illusion.
The Wicked City LP (from 1982)features an all-star cast of backing musicians, and a sleeve by Tessa Pollitt. A couple of tracks, thankfully , have appeared on YouTube (god bless the posters). But I am still yearning to hear the 12 minute Court Room drama and the closing Blues Party.