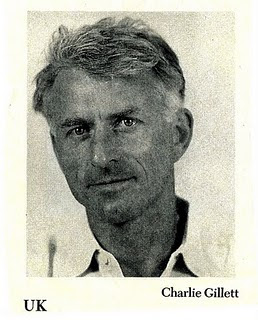 One of the things I’ve been slightly wary of with the Anywhere Else But Here Today project is the whole world music thing. I am, shall we say, conscious that the term world music has certain connotations that are not positive ones. It conjures up for some images of deadly earnest ethnic or traditional folk sounds. For others it’s an awkwardly convenient cover-all label for music that is non-Western in origin. I don’t think what’s been included in this project can really be termed world music, even though it’s pop music from around the world. There is, ahem, a world of difference.
It’s interesting I should be nervous about the phrase. It shows how labels are used against us, I guess. I can’t even remember how the phrase came to be part of the musical vocabulary. It’s like indie, in that it’s crept up on us insidiously, and is now used remorselessly. I guess it has some roots in the World Of Music And Dance (WOMAD) events Peter Gabriel was instrumental in starting back in 1982. I am allergic to festivals so I’ve never been to WOMAD, so the only thing I really know is that 23 Skidoo were on the very mixed bill for that first event, and that their performance is captured on The Culling Is Coming LP with lots of Tibetan percussion and metal bashing and eastern/industrial stength influences. That’s one approach to absorbing influences from around the world, but it’s not my favourite 23 Skidoo moment.
The designer Neville Brody worked very closely with 23 Skidoo, and indeed with Fetish Records for whom they recorded. Among the other labels Brody designed sleeves for was, briefly, Charlie Gillett’s Oval label. This was when Charlie had become involved with releasing African music, and I loved a quote I found by him recently:
“I'm not sure when I first heard the sound of a kora, but I do remember that everything changed in 1983 when I brought home an album by Djeli Moussa Diawara I found at Sterns African records Centre soon after the shop moved under new management from Tottenham Court Road to Whitfield Street. Only four songs, all of them long, and I played this entrancing thing over and over, marvelling at the mixture of kora and guitar, the soaring voice of Moussa and the dreamy answering chorus of women. The endless circles of sound from the balaphon were hypnotising. I played all four songs on Capital Radio, and found that listeners were as enchanted as I was. In those optimisitic, pioneering days, I still believed that such music was bound for the mainstream, if it were pushed with the right combination of enthusiasm and initiative, and this seemed to be the record that might make a breakthrough. Hoping to release it on Oval, I tried to make contact with the owner of the recording.”
For me the key sentence is: “In those optimisitic, pioneering days, I still believed that such music was bound for the mainstream, if it were pushed with the right combination of enthusiasm and initiative, and this seemed to be the record that might make a breakthrough.” That sums it all up for me. And Charlie, too. I only vaguely remember Charlie Gillett’s Honky Tonk Sunday lunchtime shows on Radio London back in the ‘70s, and I only occasionally tuned in to subsequent shows on the station’s descendents, but the man’s knowledge about and passion for the music he was playing always shone through. I would, incidentally, enthusiastically recommend the Boot Sale Sounds site where there are some vintage recordings of Charlie on the radio.
I once stumbled across a free concert in the Royal Festival Hall, on London’s South Bank. I can’t even remember who was playing, but I happened to find myself next to Charlie who was standing there by himself, enthusiastically enjoying the music. I liked that, and I can understand why so many were keen to pay their respects when he died earlier this year. Among the tributes I remember reading, one particularly stood out for me and perhaps said more about the man than all the music industry testimonials. It read: “Five years ago Charlie used to join us, a group of young Eritreans, for Sunday morning football at Clapham Common. I never knew he was so famous. He was gentle and interested in the nobody's like us. RIP, Charlie. With love.”
Posted by Yr Heartout at 02:46