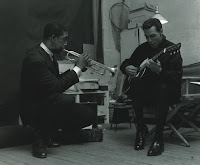 Long ago and faraway I remember people going on about 'unique selling points' or USPs. The trouble was what I thought would be a USP seemed to be greeted with utter despair. But then I'm the kinda guy who publishes something and uses jazz singer Jackie Paris as a peg to hang it on. That's Jackie to your left, with the great Kenny Dorham, by the way.
The chances are though that your record collections are not exactly overflowing with Jackie Paris records. It's entirely possible you've not even heard how singing so sweetly that it can break your heart. That's fair enough. The whole premise of the Jackie Paris film that inspired the egregious eighth issue of Your Heart Out (The Historical Romance, which can be downloaded for free here) was how on earth did someone so talented, so cool, just disappear ... but you can at least grab yourself a small selection of Jackie's wonderful work here.
I guess that putting together this edition after watching the film about Jackie Paris and reading Cosmo Landesman's book, Starstruck, about the spectacular 'failure' his parents Fran and Jay were, well, it was sort of inevitable that the theme of fame and fate would emerge. Oddly at the time I never thought to include the Rich Kids' words about how there's those who make it and there's those who never may ...