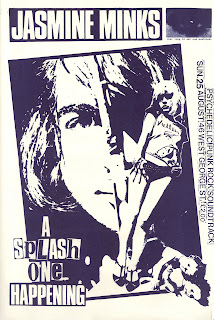 On a day when we've lost the Seeds' Sky Saxon and Michael Jackson it seems appropriate to think of the Jasmine Minks. If you've read the elegiac eighth issue of Your Heart Out, The Historical Romance (check out our library on your left ... always on the left) you'll have seen reference to the immense influence that '60s US garage punks had on young kids in the mid-'80s. In many ways it was the unifying factor for so many groups, fanzines, clubs etc.

The Primals/Pastels crowd up in Glasgow ran for a while in '85ish a club called Splash One, where a psychedelic punk rock disco was billed. I remember going to see the Jasmine Minks there. I remember seeing the June Brides at the Pindar of Wakefield in Kings Cross then travelling up with the Jasmines the next day. It was in Glasgow that I first heard them play Cry For A Man, with Derek's memorable trumpet part, and it was incredibly moving. I'm not sure everyone realised that this punk/soul blast was the way the world should be going, but hey ho.

The Jasmines used to do a fantastic live version of In The Past, the old We The People/Chocolate Watch band number. A lot of groups had their '60s punk cover. The Wolfhounds did Mr Pharmacist I think until The Fall released their version, and The Mary Chain did the Standells' Barracuda.

Ah but there were detractors accusing us of rather being anywhere else but the here and now (guilty) and why not do something modern like all the electronic groups. Hmm. I remember Adam from the Jasmines trying to describe the Mary Chain before anyone had really seen them and then they were the ones starstruck at seeing the singer from the June Brides. Anyway Adam said the Mary Chain were like the Cabs doing Nag Nag Nag. Pure punk rock. Like these old garage punk fans cranking out an old Seeds cover. Yeah! We're all punk rockers at heart. Take it boys ...